Pineapple popularity has exploded over the last few years and I have to say that I am riding the pineapple wave. And with my second son’s first birthday party coming up I thought I would satisfy my pineapple infatuation by throwing him a pineapple party!

And who doesn’t love a DIY pineapple?

I like to make as much of the party decorations as possible to save me a wad of cash. I also foundthese really cute, free pineapple printables like these party favor pineapples, this cute summer pineapple banner and this pineapple coloring page for the kiddies goodie bags!

The items you’ll need for your adorable pineapple…

First, cut the fronds to the desired length that you want. I cut mine about 6 inches. I also cut mine from longer to shorter so that when I rolled it up it would have some dimension of longer and shorter fronds.

The poster board gives almost the same feel as real pineapple fronds. Then I just curled them slightly with my nail, pulling from the wider end to the smaller making the fronds look more life-like.

Then roll up the fronds, shorter ones first, and then tape together so it doesn’t uncurl. Roll the next piece, shortest to tallest, and tape to the one already rolled up.

Then use the fronds (no, not the Fonz) and trace a circle onto the top of your pineapple. Take a knife and cut straight down into the pineapple. Push the fronds down into where you cut. It should stay secure but for extra security you can add some mod podge to the edges. 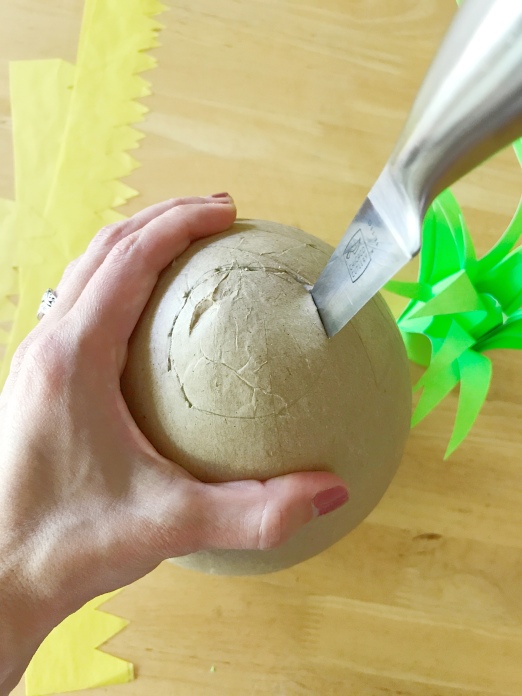 *Warning* Knives in pictures are larger than they actually are.

Next you are going to cut small triangles into the edge of the tissue paper. After you have cut that leave a 2 inch edge so you will be able to glue the tissue paper onto your pineapple. Now, you also have some cool triangle confetti. You’re welcome.

I cut the tissue paper into smaller sections so they would be easier to glue onto the pineapple. I glued them with the triangles pointing up because I didn’t want the hassle of making sure I didn’t bend or crumple the points when it got down to the bottom of the egg. And it makes more sense that the triangles be pointing up since a pineapple grows up and not down, right? Humor me and just nod at your screen.

You can glue the tips down if you want but I left mine unglued so that it would have a more realisitic look.

Coming along pretty nicely. This took me only a few hours to glue all of the tissue paper on. It might be a little quicker for you if you don’t have kids. 😉

After you have all of your triangle strips glued onto the egg, take a brown sharpie marker and draw little up arrows onto the tissue paper triangles, like so…

This turned out so well I wish there had been another egg so I could have made more! I can’t wait to work on the rest of the pineapple decorations for little D’s birthday party next month. 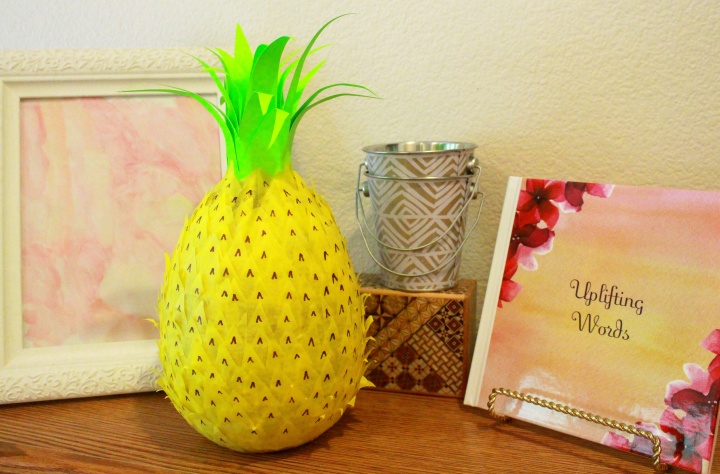 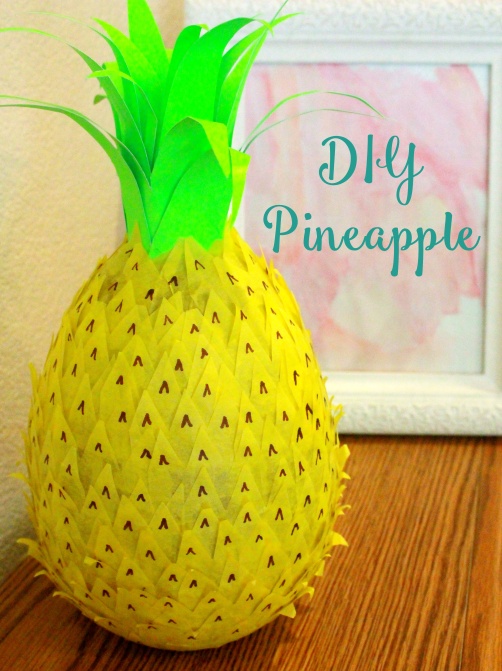